Abattoir monitoring is a practical and cost effective means of checking for OJD. Trained inspectors at abattoirs inspect lines of adult sheep (2 years or more) for visible signs of OJD in the intestines and lymph nodes.

Abattoir monitoring aims to identify infected flocks – this is particularly important for areas with little or no known prevalence. Abattoir monitoring provides feedback to producers on the effectiveness of their OJD management programs and producers with negative monitoring results, may be eligible to trade their sheep as having a lower risk of being infected with OJD.

There are two abattoir monitoring negative status results that producers may use:

1)     Abattoir 500 status – where at least 500 sheep, over 2 years of age, have been submitted to an abattoir in the past 24 months, in 1 or more lots, and have been examined and all found negative for OJD. The sheep must have been on the property for at least 2 years.

2)     Abattoir 150 status – where at least 150 sheep, over 2 years of age, have been submitted to an abattoir in the past 12 months, in 1 or more lots, and have been examined and all found negative for OJD. The sheep must have been on the property for at least 2 years.

To obtain information about your abattoir monitoring results or to request inspection to be arranged at your abattoir, please contact your State OJD coordinator.

Inspecting for OJD in the abattoirs

Sheep that are infected with OJD may show the following changes in their intestines:

If the sheep have lesions suggestive of OJD, the inspector collects samples from up to three sheep in a line. These samples are submitted to a laboratory for microscopic examination. 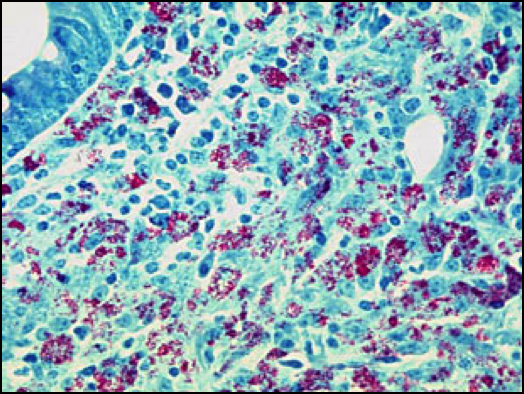 A program to monitor for at key meat-processing plants throughout Australia has been in place since 2002.  Since 2007 this program has been expanded and is now known as the National Sheep Health Monitoring Project (NSHMP). The monitoring has been jointly funded by the Sheepmeat Council of Australia and Australian Wool Producers. It  monitors lines of adult sheep in abattoirs for a number of important animal health conditions in addition to OJD which  reduce farm profit through productivity losses or wastage in meat processing plants through condemnations.

Awareness is important so that these conditions can be managed or prevented on-farm and losses reduced. The NSHMP has two aims i) to collect information that can be used by producers, industry groups, processors and governments to support ongoing market access; and ii) to provide animal health status reports to each individual producer. Reports are returned to producers in some state by the departments of primary industries.

A blood test to detect antibodies to OJD bacteria in the blood (serology) is also available but it has drawbacks. It is less sensitive than PFC and so more sheep must be tested to provide a similar level of confidence in the results. Antibodies are also produced in the blood following vaccination. Approval by the state Chief Veterinary Officer may be needed before using the blood test.

Ongoing research is also focusing on the development of new tests that can quickly and accurately detect infected sheep, particularly in the early stages of infection.